Management and Treatment Program for Lymphedema

Lymphedema is a common, yet dire diagnosis that changes a person’s life forever. This disorder causes swelling due to excess lymphatic fluid in one limb or more that will never truly go away. The Lymphatic System carries waste and excess fluid in the body to the Lymph nodes where the excess is fluid is processed. 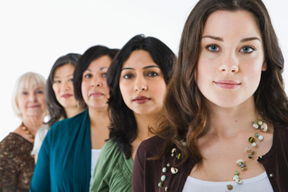 When the body’s Lymphatic System has been altered by Surgery or Radiation, problems can start. The fluid movement process slows down and the fluid stays where it is, rather than be transported away. This causes the limb or limbs to swell because of the extra fluid.

Lymphedema of the arm often occurs after surgery or radiation for breast cancer. Between 10 to 40% of breast cancer patients develop Lymphedema. This type of Lymphedema can affect both women and men. Yes, even men get Breast Cancer. If this disorder goes untreated, it can cause multiple problems like infections, loss of use of the limb or even result in death. The swelling may not even develop for years following breast cancer treatment. But, one it starts, getting started with treatment is very important. Following breast cancer diagnosis and treatment, it is very important to be aware of this potential disorder and how to treat it

Lymphfluid is a thin, clear fluid that circulates throughout the body to remove wastes, bacteria, and other substances from tissues. In layman’s terms, the lymphatic system acts like your bodies sewer system. Edema is the buildup of excess fluid. So lymphedema occurs when too much lymph collects in any area of the body. If lymphedema develops in people who’ve been treated for breast cancer, it usually occurs in the arm and hand, but sometimes it affects the breast, underarm, chest, trunk, and/or back.

Why does lymphedema happen? As part of their surgery, many people with breast cancer have at least two or three lymph nodes removed from under the arm (sentinel lymph node biopsy), and sometimes many more nodes (axillary lymph node dissection). If the cancer has spread, it has most likely moved into to those underarm lymph nodes first because they drain lymph from the breast. Many people also need radiation therapy to the chest area and/or underarm. Surgery and radiation can cut off or damage some of the nodes and vessels through which lymph moves. Over time, the flow of lymph can overwhelm the remaining pathways, resulting in a backup of fluid into the body’s tissues.

Lymph is a clear fluid that contains white blood cells. White blood cells help fight infections. Lymph vessels, like blood vessels, run all through the body. They carry lymph, cells and other material. Lymph from tissues and organs drains into the lymph vessels and is carried to the lymph nodes where it is filtered. While lymph nodes are found throughout the body, the ones near the breast (see image below) are those affected during treatment for breast cancer. 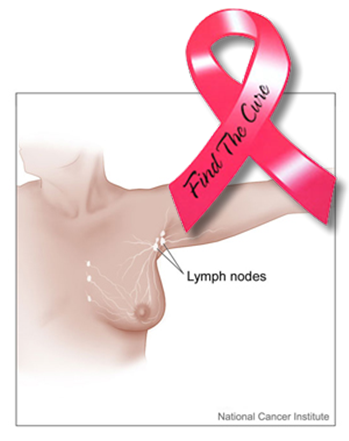 Tip of the Week:

For all those women who have suffered with Breast Cancer. October is Breast Cancer Month, and a good time to remind all women that you are protected by t he " Women's Health and Cancer Rights Act" This law was passed in 1998 by Congress. It gives women special rights as to Breast Cancer.

- reconstruction of the breast on which the mastectomy has been performed

- prostheses at the site of the surgerye

- treatment of physical complications of all stages of mastectomy, including lymphedemas

This can come in handy when your insurance company tries to tell you that you cannot get treatment for complications of Breast Cancer. We have used this Act several times when insurance companies have tried to deny a Lymphedema Compression Pump. Sadly, Medicare has exempted itself form this Act. It holds no power over them. But it effective for private insurance companies.

Protect your rights. Be aware of the law.